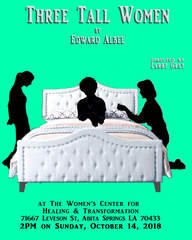 A Presentation of Playmakers Readers Theatre

“Three Tall Women” is a masterpiece of modern theatre about an imperious old woman lying ill and about to die. She is attended by two other women and visited by a young man. It turns out that the attendants are the younger version of the dying woman. The dialogue is full of wit, pain and laughter as we learn of aging without sentimentality. It lays bare how we all live, love, settle for and how we die.

The performance is directed by Larry Gray and performed by Ann Pourciau (A) Anysia Genre (B) and Megan Eddy (C). Tickets are $15, and a portion of the proceeds go to the Women’s Center.
Tickets: $15
Purchase tickets at www.playmakersinc.com
​
Questions? Contact the Women's Center (985) 892-8111 or info@womenscenterforhealing.org
Women's Center for Healing & Transformation
71667 Leveson Street, Abita Springs
(985) 892-8111
info@womenscenterforhealing.org